....this morning as the tavern regulars reached the bottom of page 3 of the Sunday Times. 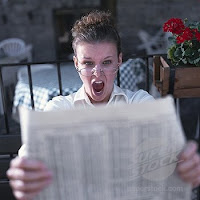 While MPs fritter away our taxes on plasma TVs and designer rugs, the NHS is not far behind with a bunch of barmy schemes offering smokers and drinkers i-pods and helicopter rides if they sign up for help to kick the habit*.

While I don't have a problem with Lanarkshire's leisure centre passes for recovering addicts - a cost-effective way to help them stay healthy - I am less convinced by the cash bribes for those giving up smoking; surely the amount they save by not buying the fags is in itself an incentive.

The one that really sends the blood-pressure skyrocketing, though, is the hare-brained scheme to enter every teenager tested for chlamydia in a prize draw for a games console - "The bad news is that you do have an unpleasant STD, but hey! you've won a Nintendo Wii! How about that!"

All this has come to light courtesy of the same Freedom of Information Act that has provided us all with such quantities of indignation and mirth over the past fortnight. One can only assume that there will be more of the same to come in the future, although anyone averse to bad language should probably avoid the tavern when it does.

*via a prize draw - not such a good idea if they are also addicted to gambling.
Posted by Macheath at 15:38