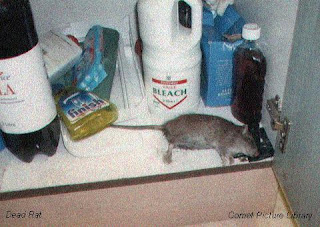 Ma Peachum – always a woman of infinite resource and sagacity – says that when you find a dead rat, you have to do one of two things; you either hide it away and hope no-one finds out about it or bring the revolting thing out and dispose of it publicly.
This week, we have been able to watch both methods put into practice; while Cameron has grasped the expenses nettle and called for police investigation (though it helps that the prime property/tax offenders aren’t his responsibility), Brown has vanished into the murky depths of No. 10, emerging only for some carefully choreographed photo-ops.
There was some speculation in the press this week that Brown’s hands-off Mafia-boss approach – leaving a team of ‘enforcers to do the dirty work – might pay off by keeping his hands clean, but it seems that they underestimated the public desire to see justice done.
In fact this particular dead rat has afforded far more than Ma Peachum’s simple alternatives; there is the political capital to be made from a public moral stance, the opportunity to settle old scores and the chance of a sly bit of Class War (moats and chandeliers, anyone?), to say nothing of the Telegraph’s boosted circulation and the rising profiles of political journalists.
But perhaps the most interesting effect is that, up and down the land, rich or poor, we’ve all got a ready-made conversation topic of mutual interest. In fact, not since the days of Thatcher have I discussed politics so frequently and with so many people; friends and colleagues, my hairdresser, bus drivers, shop assistants - everyone I meet seems to have an opinion and wants to share it.
They may be a bunch of amoral, avaricious scorpions, but you have to admit they’ve brought the country together.
Posted by Macheath at 10:33