Misery Memoirs and a Trip to Tyburn 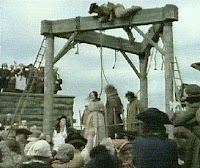 As regular readers may have noticed, it’s been a bit quiet around here recently, largely due to a week in which the terms overtime, root canal and budget have been bandied about too frequently for peace of mind. In need of cheering up, I visited my local bookshop today – the one with a slightly eccentric notion of classification.
Since my last visit, a new category has sprung into being; a shelf label now proudly announces ‘Unfortunate Lives’. Under this, a handwritten card bears the following description: ‘A special feature showcasing lives of individuals struggling with adversity.’
Showcasing? Showcasing? Why not just go the whole hog and call it ‘Let’s have a good old vicarious wallow in someone else’s misery while congratulating ourselves on how caring we are'? And someone not only thought the term appropriate for these horrible books, but thought so for long enough to write it out neatly on a card and tape it to the shelf.
Since Mis. Lit. was publicly embraced by Oprah Winfrey – no stranger herself to lucrative abuse memoirs – as ‘life-affirming’ and ultimately uplifting redemptive therapy, the floodgates have opened. In imitation of the sainted Winfrey, Britain’s Richard and Judy ran a sort of ‘more abused than thou’ phone-in competition, giving viewers 2 minutes to pitch their harrowing real-life stories - the prize, a publishing contract worth £25,000.
There have been efforts to resist this revolting trend – the Observer lifted its voice, Cassandra-like, three years ago to warn of the rapid development of the genre, asking plaintively, "Whatever happened to, say, ‘Little Women’ or ‘Cider With Rosie’?” With supreme irony, a google ad at the end of the online article invites you to ‘sell your story for CASH’.
Which brings me neatly to the market for this kind of thing. Who is buying it in such quantities that publishers are churning it out at unprecedented speed? What do they hope to gain from reading of repellently sadistic acts? Are they really any different from the crowds who once flocked avidly to bear-baitings or the public hangings at Tyburn?
A clue, perhaps, can be found in the Sun’s report of a 12-year-old girl’s mistreatment of a dog, filmed by a ‘sickened’ neighbour for 13 minutes (hat tip to Unenlightened Commentary), and more specifically in the way that the Sun’s website helpfully included the footage so ‘readers’ could appreciate it for themselves.
Posted by Macheath at 12:11