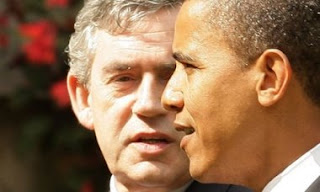 It's probably lese-majeste or something to suggest it, but anyone who has observed the gradual onset of deafness in a close family member might be forgiven for thinking something rather familiar is going on in Number 10.

Look, for example, at the footage of Brown staring directly at Obama while the President was speaking, and ask yourself whether he is trying to see the man's lips move. There have been occasional errors in pronunciation; surprisingly for a man for whom attention to detail is crucial, he apparently referred to 'Jane Goody' - suspiciously like the consonant confusion typical of hearing loss.
Or consider the Prime Minister's behaviour in the European Parliament; forced by protocol to remain in place for the subsequent seven speeches, he chatted, made notes and manifestly failed to listen. This is consistent with his reported habit of continuing to write at his desk when colleagues try to discuss business with him. Is he being rude, or is it simply that if he is obviously not listening, he cannot be held accountable for details that escape him?
A close relative with relevant experience drew my attention to Brown's head movements - with sight in only one eye, lip-reading requires a particular angle of vision. Anyone familiar with gradual hearing loss can attest that sufferers are often skilled actors and mimics, seemingly following a long conversation while actually having little idea what has been said (and likely to agree to suggestions they have not fully heard - such as 'Shall I send this e-mail?').
Rightly or wrongly, we expect our political leaders to be superhuman. Vince Cable's hairline may have lost him the LibDem leadership and the Iron Lady's tears were front page news; the pack is always ready to fall on a failing alpha male (or female). If I'm right, Brown faces a terrible dilemma; either admit a weakness that could bring him down or struggle on and risk a potenially disastrous misunderstanding in future.
Posted by Macheath at 20:08