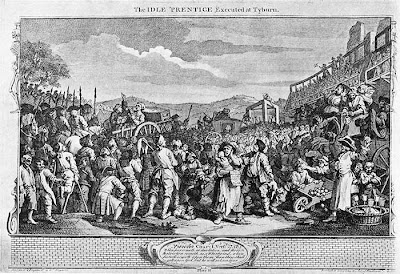 Newgate is no stranger to the seedy side of life, but even the rakes, harlots and highwaymen of Peachum’s Tavern have been choking on their gin at this week’s tabloid news sensation. The most hard-bitten chroniclers of life in the stews of Hogarth’s London would be unlikely to dream up a scenario as bizarre as that surrounding 13-year-old Alfie Patten and his baby daughter.

Before the welfare state, an unplanned teenage pregnancy meant another mouth to feed, providing families in straitened circumstances with a strong incentive for curtailing the sexual activity of their unmarried resident children. The families involved in this case, however, seem to have no such compunctions. The result of allowing two under-age children to sleep together on a regular basis has been a massive financial windfall in the proceeds of a bidding war between the tabloids, courtesy of, inevitably, Max Clifford. To complicate matters, up to eight alternative potential fathers have emerged from the 15-year-old mother’s somewhat murky past, presumably attracted by the vast payouts on offer.

Meanwhile, like Karen Matthews, the baby's relatives are well-versed in the potential benefits of mass publicity. The next development (according to the boy's father) could be the unveiling of the paternity test results live on a TV chat show, a spectacle which rivals even the Tyburn public hangings for cruel and ghoulish entertainment and will doubtless attract the same kind of baying mob for an audience.

When the Department of Health's Teenage Pregnancy Unit instructed teachers to tell their pupils about the "enjoyment of early fatherhood" and inform them that teenage boys could be "proud and able parents", one fervently hopes that this was not the outcome they had in mind.
Posted by Macheath at 15:05