Oh, I do like to be beside the seaside!

For a supposedly seafaring nation with a strong maritime tradition, it's odd how many people each year get into trouble because they have failed to grasp the idea that the sea goes up and down twice a day and that waves generate considerable force.

And that is without the extra hazards of water-borne stones and debris caught up in rough seas and propelled with enough force to cause serious injury or kill.

This week's tidal surge, unsurprisingly, brought out the Darwin Award contenders in droves. One particular example sticks in the mind; according to a policeman in Southwold (quoted in the BBC live coverage):


"We had to drag a photographer off the prom that was laying there with his legs wrapped around a metal railing, photographing the waves going over the top of him."

And amid the myriad examples, as I've said before, there really ought to be a special category for those who, having reproduced, appear to be doing their best to rectify the situation by disposing of themselves and their progeny in one fell swoop:


Police in Yarmouth urged 'sightseers' to stay away, saying they were placing themselves at 'significant risk'.

They said crowds, including people with small children on their shoulders, had been seen gathering close to the seafront.

Meanwhile, in Scarborough, a photographer recording the predictable foolhardiness of White Van Man scooped an unexpected bonus; yes, that really is someone pushing a pram along the notoriously dangerous seafront in a storm. 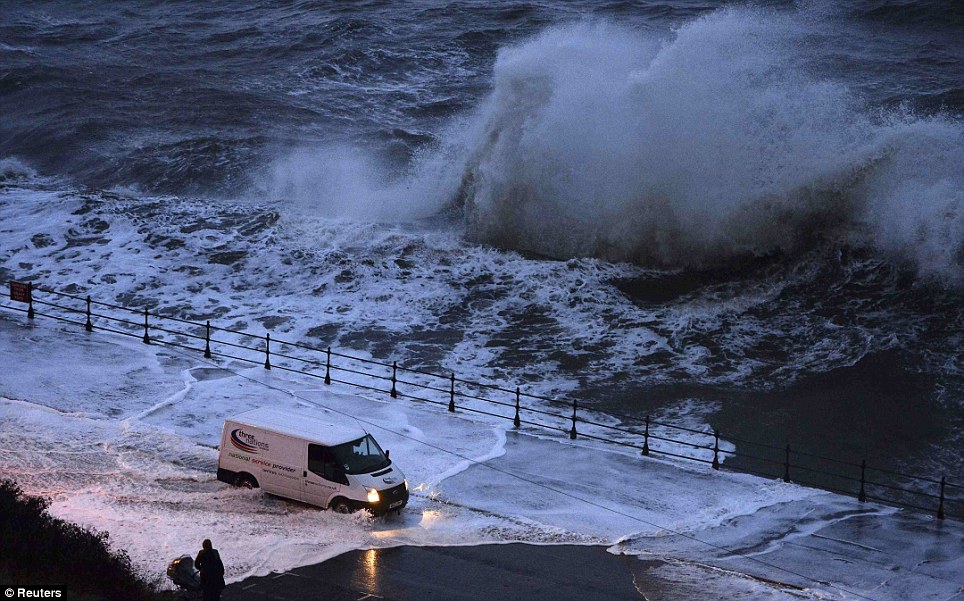 
And finally, if you will forgive a bit of uncharacteristic whimsy, amidst the formulaic coverage by tired reporters who already knew that, even if they gave their all, the results would be eclipsed by the media Mandelafest and relegated to an edited slot on the local news, this was a welcome breath of fresh air.

Be patient - the presenter doesn't appear until 30 seconds in - and do watch to the end for a charming display of incipient apocaholism.

(credit to Sky News for the discovery)
Posted by Macheath at 09:43