Have you seen this man?

Not exactly the Napoleon of crime, is he? 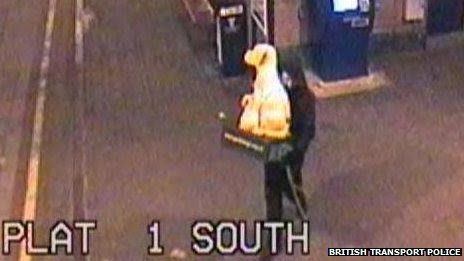 This charming specimen was filmed walking out of Bicester station at 3.50am carrying a three feet tall model Labrador containing funds collected for a guide dog charity.

We've seen the theft of a depressing number of Royal British Legion collecting boxes this year and an RNLI tin stolen by a fisherman who, barely a few weeks later, was part of a crew rescued from a sinking boat by lifeboatmen (I bet some of them secretly wished they had thrown him back again when they found out).

But this is on another scale altogether, at least in terms of risk vs gain; how much is ever allowed to accumulate in those boxes? Hardly enough, I'd suspect, to pay for the petrol to get there: I'm reminded of the thieves who took £30 worth of lead from a model village in Great Yarmouth.

Though all thefts are the result of the same lack of scruples and conscience, stealing a charity collection box seems somehow even more reprehensible; like the recent theft of a child's wheelchair or the removal of metal lettering from a war memorial, it strikes a chord of outrage with the general public.

For the perpetrator, of course, that distinction doesn't exist; there is only opportunity.

Pointless, vile and despicable; I'm going to need a new label for criminals like this. Sadly, the way things are going, I think it's probably going to get a lot more use in future.
Posted by Macheath at 20:48