Gangnam Style - the beginning of the end?

At the risk of being accused of fiddling while Rome floods, today seemed a good time to share this: 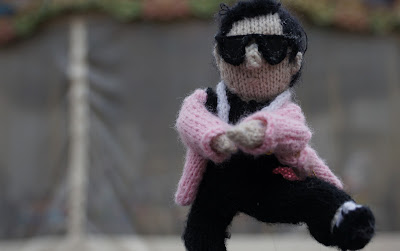 The satirical tricoteuse of Delit Maille* has turned her attention to the ubiquitous Gangnam Style video in her own unique fashion.

Actually, I have to admit I've never knowingly heard the song - when I watched the video for research purposes I had to do so without sound - so I apologise if I have inadvertently inflicted an earworm on anyone.

What interests me is the way this phenomenon has swept the media world, with amateur tribute performances in settings as diverse as international sports matches, Google HQ, Eton College and Chequers. Covers and parodies abound, while Ai WeiWei, Amnesty International and Free Tibet have all enlisted the dance for political purposes.

That being so, it's hardly surprising that the Righteous have jumped on board:


The American Council on Exercise estimated that dancing "Gangnam Style" will burn 150–200 calories per half hour and the song was used by Northampton General Hospital to promote hand washing as part of the 2012 Global Handwashing Day on October 15.

And now it's become the most watched YouTube video ever. While eschatology isn't my specialist area, something about this ubiquity is uncannily reminiscent of the kind of inexplicable global phenomena that are supposed by major religions to herald the end of the world.

Maybe the Mayans were onto something after all....

*roughly translates as Outlaw Knitting as well as sounding like Daily Mail - un vrai coup de génie linquistique. For those who prefer a rather more cultured subject, I recommend her recent post, Tricote ton Manet.
Posted by Macheath at 10:53