You can always count on the Clacton and Frinton Gazette for a good read, and this week is no exception.


A man has been jailed for stealing an ambulance fast response car.


Daniel Glover led police on a high-speed chase along the A12 after stealing the vehicle in Clacton in the early hours of New Year's Day. The car was only brought to a halt when officers used a ‘stinger’ to burst its tyres.

It seems he adopted this unusual choice of transport to get back to his London home after attending a party in Clacton. Police found him to be more than twice the drink-drive limit - probably much more, if the excuse he offered is anything to go by:


He claimed he did not know the vehicle was an ambulance car as it was dark at the time.

Just for the record, this is an ambulance fast response car. 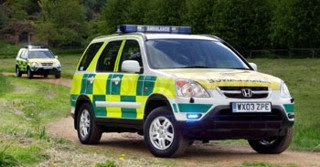 Now I may be going out on a limb here, but I'd say those blue lights on top are a bit of a giveaway, and, in any case, I'm guessing those bright yellow bits are designed to be visible even after dark, particularly under the street lights of Valley Road. Perhaps he was confused by the fact that the word AMBULANCE on the bonnet is written backwards.

Meanwhile, according to the Telegraph, a family member adds an interesting element of confusion to proceedings:


Outside court Glover's father said: "He doesn't drink normally and he didn't know what he was doing. He thought it was a taxi."

To be honest, it's not really the best plea in mitigation, particularly for a man who actually makes a living delivering taxis on a daily basis. At least he admitted the offence:

The last of which translates as threatening to break a police officer's nose, which at least adds a certain credibility to his claim that he wanted to go home after falling out with someone at the party. They must have been glad to see the back of him.

Meanwhile 'aggravated' doesn't even begin to cover the offence of stealing a paramedic's car (and equipment) on A&E's busiest night of the year - an hour after the theft, a man was attacked and fatally injured in Clacton and, at the same time, a security guard was stabbed in nearby Walton.

The subsequent silence on that story leads me to hope the victim is making a full recovery but he's certainly had his fill of bad luck; it's bad enough to be attacked in the early hours by knife-wielding thugs without finding out that some drunken oaf has stolen the local paramedic's car.
Posted by Macheath at 09:31