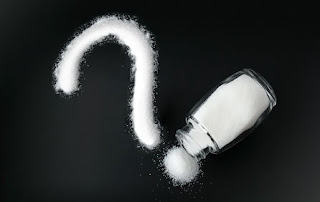 You know that white crystalline stuff they keep under the counter? The substance you have to ask for specially, so lethal are its effects?

For years now we've been bombarded with messages proclaiming that salt consumption causes high blood pressure, strokes and heart disease and seen it subject to increasingly draconian restrictions aimed at meeting the future target of no more than 6g per adult per day.

Well, the Belgians may just have blown the whole thing wide open:

An eight-year study by scientists in Belgium found that people who ate lots of salt were no more likely to suffer problems with heart disease or high blood pressure than people who ate less salt.

A turn up for the books, n'est-ce pas? The experiment used data from 3,700 subjects divided into three groups according to their salt consumption and researchers found no diference in the rate of heart and blood vessel diseases. However, there's more:

Participants with the lowest salt intake had the highest rate of death from heart disease during the follow up (4 per cent), and people who ate the most salt had the lowest (less than one per cent).

So, if they are right, not only have thousands of health-conscious people have been eating tasteless food for years for no reason whatsoever (apart from a smug, self-satisfied glow, that is, and a feeling of moral superiority); they may even have been exposing themselves to the very thing they were trying to avoid.

Today I'm having my chips as usual with salt - and an extra helping of Schadenfreude.
Posted by Macheath at 21:22