Holding up the mirror 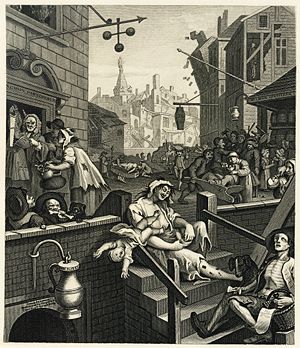 "'S about that picture you got in your window."

"Ah yes, 'Gin Lane'. A satirical portrayal of modern society. I'm rather proud of it, actually; in fact, I'm planning to make a print of it to sell."

"It's a bad influence, see? All that drunkenness and so on; it's offensive, like. The Beadle's on 'is way and 'e wants you to get rid of it; it's all part of 'is new plans for a sober October. Burning's best - it'd go up lovely on the fire!"

"Don't matter, squire; can't have a picture like that where people might see it and get the idea they wants a strong drink."

"But... but... the whole thing is meant to show the evils of drinking cheap spirits instead of good honest beer. It's satire!"

"Couldn't say anything to that, squire; Beadle's against beer too, he is. In fact, 'e's dead set against all that sort of thing. Now 'and it over before 'e gets 'ere and we'll be on our way. I'm sure you don't want any trouble now. After all, it's 'ardly as if it's a loss to future generations, is it?"


(Inspired, of course, by recent events in Clacton.)
Posted by Macheath at 08:00