Julie's on to a nice little earner 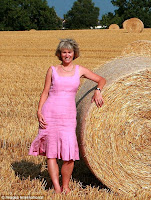 She's back! Julie Kirkbride, former MP and occasional muse of this column, is looking for a tenant for her Worcestershire mansion flat at £925pcm - yep, that's right; the one where we subsidised the £50,000 extension and the £500 bedroom curtains.

By coincidence, the Times today reports on the EU decree that 'tourism is a human right' and that the taxpayer should subsidise foreign holidays for those too poor to afford it.

'The scheme, which could cost hundreds of millions of pounds a year, is intended to promote a sense of pride in European culture, bridge the north-south divide in the continent and prop up resorts in their off-season.

Officials have envisaged sending south Europeans to Manchester and Liverpool on a tour of “archeological and industrial sites” such as closed factories and power plants. The idea is based on a project in Spain in which holidays in the winter off-season are subsidised by the government.'

Well, if they fancy Bromsgrove instead, there's a flat already available, substantially extended with taxpayers' money; surely the state should be entitled to use it for free every now and then. In fact, there are houses in constituencies all over the country paid for, at least in part, by us.

So why not fill them with southern Europeans in search of culture? I'm sure we could develop a pro-rata system - we paid for your guest room so we're putting a couple of Greeks in there for a week next Thursday, OK?
Posted by Macheath at 13:50