Close Encounters of the Incendiary Kind 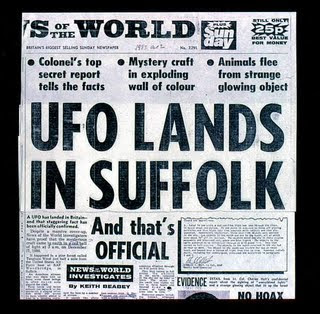 This week the truth is out there - way out there - in the guise of a 66-year-old lorry driver from East Anglia whose shady dealings apparently led to 'Britain's Roswell'.
Anyone with a passing acquaintance with UFO-based TV programmes will have seen the juddery out-of-focus reconstructions of US servicemen dashing about breathlessly in Rendlesham Forest on the trail of some multi-coloured lights. The 1980 incident achieved notoriety as an encounter with a possible UFO which left behind physical evidence in the shape of scorched trees and traces of molten metal.
Now Peter Turtill has come forward and claimed that on the night in question he found himself inadvertently in possession of a truckload of stolen fertilizer which broke down on the Rendlesham road. Not wanting to be caught with his incriminating cargo, he took the truck into the forest and set light to it, generating a spectacular burst of vari-coloured flames as the chemicals caught fire.
When the armed Americans appeared, he took fright and towed the burning truck away; not surprising, since being caught with a lorry-load of hooky fertilizer in the vicinity of a US airbase could in no way be described as a good move. There are, to be sure, several loose ends in this tale but then the world of a man who 'lends his truck to a friend' who 'returns it' full of stolen goods probably doesn't bear close scrutiny.
This invitation to wield Occam's Razor has, however, been met with charming scepticism by the UFO fraternity. This week's prize for logic goes to UFO investigator Brenda Butler, who wonders why he remained silent for 29 years (the dodgy fertilizer deal may have something to do with that) and opines:
"There have been so many witnesses who have come forward. He would have to come up with an awful lot of proof to call them liars."
Meanwhile, Mr Turtill must have been enjoying a good laugh...
'In 2005 (or possibly earlier), Suffolk's Forestry Commission received £2,000 of Lottery funding from the Lottery's "Awards for All" grants project. The Forestry Commission decided to spend a portion of that money on a "UFO trail", in the aim of attracting more people to Rendlesham Forest.'
(rendlesham-incident.co.uk)
Posted by Macheath at 14:19