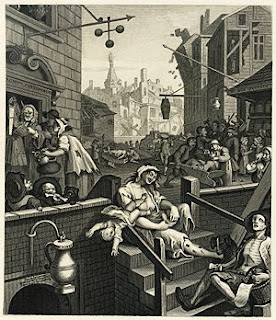 A story is emerging in the courts this week which has us wondering whether we have all been returned to 18th Century Newgate - a mother (partial to bawdy jokes about policemen) who conspires to kindnap and hide away her drugged child in order to secure a reward from well-meaning benefactors could have come straight from the easel of Hogarth or the pages of Swift or Defoe.

In fact it has been alleged that the plot was inspired by an episode of 'Shameless' broadcast a few weeks before. While Hogarth sought to document and combat social evils as well as to entertain, it seems his modern-day successors might actually be helping to create them.

Meanwhile in Haringey Baby P dies of ill-treatment and neglect. For some people the slums of Hogarth's London are very near indeed.
(William Hogarth; Gin Lane)
Posted by Macheath at 08:07