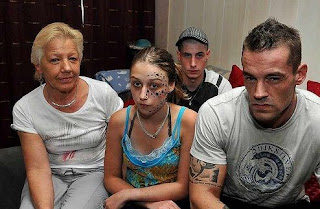 Despite serious competition from Westminster, this week's prize for the most implausible lie goes, of course, to Belgian Kimberley Vlaeminck.


The only surprise in the case is how anyone thought this would get to court; since the father started off the whole media circus after going to the police, I suspect the involvement of a newspaper or magazine may have been a catalyst. This story is simply a vastly overblown version of what happens when teenagers get it wrong and blame someone else.


More surprising is the tattoo artist's chastened declaration that he will from now on get written consent before beginning work - the implication being that any one of us could previously wander into his tattoo parlour on impulse and come out looking like Angelina Jolie or David Beckham - at least in the human graffiti sense - without any contract changing hands.


Where tattoos are concerned, at least, it's clearly a case of caveat emptor - which, come to think of it, might look good written in a banner with a crest above it, right here.
Posted by Macheath at 08:47