Whoops! There goes another one! 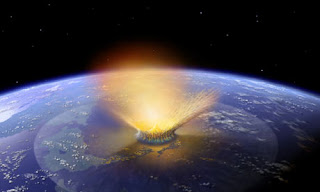 Remember Lembit Opik? Once upon a time, before he got all starstruck, his preoccupation was the rather less flamboyant subject of asteroids, specifically how to detect them and prevent them turning most of us into history (and those nearest the strike zone into geography).

Lembit never got his wish; there is no National Asteroid Agency - which is probably all for the best, as it would surely have been high on the list of the Coalition's potential cutbacks. And in any case, there's reason to believe it wouldn't have been very effective.

With all the technology at their disposal, NASA told us barely hours ago that a couple of asteroids were on their way past. The first passed 284,000 km away at 9.51 GMT this morning and the second was a scant 80,000 km away at 9.12pm GMT.

The first was estimated at 15m diameter and the second at 10m, so even if they had impacted we wouldn't have gone the way of the dinosaurs, but one can't help feeling it would have been nice to have a little more notice - not least because it's a great excuse for a party.

In fact, these fly-bys are far from uncommon in the cosmic billiards game of the solar system - turn out there are little asteroids popping up all the time. Anything under 10m would probably burn up on entry, so we weren't really in any danger from the nearest observed miss to date (6,500 km, 31st March 2004 - 6m diameter).

The thing is, that one wasn't spotted either until hours before its approach. So if the big one is out there with our name on it, when will we know? Will we have enough time to build and stock shelters, and for Morgan Freeman to make philosophical and inspiring speeches? Or will there be nothing but an undignified scramble?

For those of us who grew up in the era of 'Protect and Survive', the idea isn't so unfamiliar - oblivion from a clear sky with almost no warning. Would we handle it with dignity - or would it be better not to know at all?
Posted by Macheath at 22:06