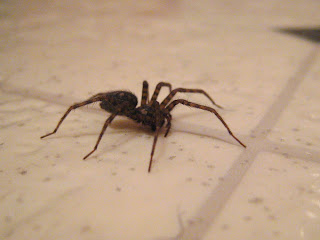 News of another Darwin Award hopeful reaches us from Clacton, where a gripping man-vs-spider confrontation had a spectacular conclusion.
‘The man was summoned by his wife to deal with a spider she had seen scuttling behind the lavatory on Bank Holiday Monday. Not being able to reach it, the man decided to kill it by spraying it with the aerosol can.’
So far so good – although he’s probably screwed up his chances of a good reincarnation next time round – but there’s a certain poetic justice in what followed; the bathroom light wasn’t working and our hero wanted to see if the beast was indeed dead, so
‘At this point he turned to a cigarette lighter to illuminate the room, but in the process ignited the gas fumes and caused an explosion. The blast was so strong it blew the man off his feet and lifted the loft door off its hinges.’
Fortunately for him, Essex Fire Service were on hand to administer first aid and assess the situation. One has to admire their thoroughness; a spokesman later said, "We're not entirely sure whether the spider got away or not but there was no sign of it at the scene."
Regular readers* will remember the valiant Mancunian who liberally sprayed air freshener round the inside of his van before lighting a cigarette; perhaps the Darwin Awards should start a special category for this kind of thing.
*What is it with Darwin Awards and Bank Holidays?
Posted by Macheath at 17:37