...or how I nearly made a starring appearance in Mark Wadsworth's blog. 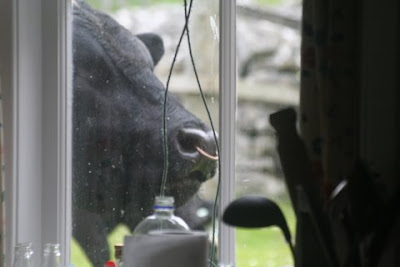 
The remote and beautiful glen where Clan Macheath take their holidays – reputedly once the hiding place of Bonnie Prince Charlie* – has changed little in the past thirty years, save for the recent introduction of a herd of cows.

In the best Highland fashion, the beasties roam free throughout the glen, grazing on the hillsides, wading picturesquely in the river and, when the mood takes them, completely blocking the single-track winding road.

And last week their lives were brightened by the arrival of a large bull (pictured above).

Since we had no plans to go out by car, the fact that the cows and their calves had taken up residence on the track leading to our rented cottage was not a major problem. By the second morning, however, they had surrounded the building, lining up around the perimeter and searching for weak points.

At this point, they were joined by the bull, who was clearly spoiling for a fight. They pushed at the gate, barged up against the garden fence and finally knocked the telephone pole askew, disconnecting our only link to the outside world.

So there we were, in the best tradition of horror films, totally isolated and the object of overwhelming interest to a herd of increasingly insistent cattle. And there we might be still, had we not discovered the reason for this unwanted attention sitting next to an open upstairs window.

Cattle are naturally curious and might well inspect any newcomers to the glen, but we had inadvertently provided an added attraction in the shape of the Urchin’s malfunctioning laptop. The fan had inexplicably begun to make an intermittent low-frequency noise uncannily similar in pitch to the bull’s testosterone-laden bellowing.

Essentially we had introduced to the glen the bovine equivalent of Tom Jones in his heyday, causing no small flutter among the cows. And naturally the bull was jealous. Since the wrath of an Urchin sans laptop is as nothing to the undivided attention of an angry bull, the problem was easily solved, but it provided us with a salutary lesson in the unpredictable clash of technology and animal instincts.

The Scottish establishment has backed the re-introduction of free-roaming cattle to the Highland Glens as a return to the traditional farming methods of a previous golden age. However, these cows are not the photogenic, plodding shaggy beasties of old but purpose-bred hybrid beef cattle crossed with an Iberian mountain strain – bigger, heavier, grumpier and far quicker on their feet.

This same herd had, it turned out, already brought the local village to a standstill more than once, bypassing a cattle grid, scrambling down a steep bank and walking down of the glen to block the road completely and deprive the village shop and tea-room of custom for several hours.

The locals we met told us that this summer has seen a sad dearth of tourists away from the major attractions. If Scottish landowners want to encourage visitors to explore the Highlands and Islands and bring a much-needed boost to the local economy, they will need to ensure that, at least in the breeding season, tourists and cattle are kept safely apart.

*Although if the legends are to be believed, during his 72 days on the run he managed to hide in practically every cave, bothy and farmhouse in the Western Highlands.
Posted by Macheath at 19:49