Another slice of squirrel, Julia? 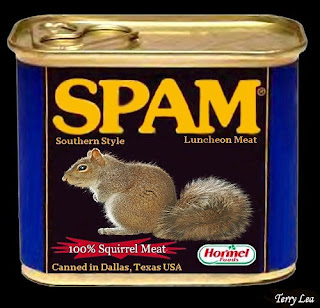 A few weeks ago I posted on the menace of forty-pound American Lobsters invading British waters and, with selfless patriotism, the valiant JuliaM offered to deal with the interlopers by eating them.
I suggested at the time she might like to apply the same tactics to the ubiquitous grey squirrel, and it looks like other people have been having the same idea. A branch of Budgens has set the cat amongst the pigeons, so to speak, by offering squirrel meat for sale.
This has not pleased the fluffy brigade, who have described the supermarket as profiting from a ‘wildlife massacre’. According to zoologist and veggie lobbyist Juliet Gellatley:
'If this store is attempting to stand out from the crowd by selling squirrel, the only message they are giving out is that they are happy to have the blood of a beautiful wild animal on their hands for the sake of a few quid.'
Er, right.
I suppose beauty is in the eye of the beholder, but, carnivore or vegetarian, it seems a little odd to classify the relative morality of meat by the animal’s looks. Presumably venison’s right out, then –"You shot Bambi’s mother!”
Jenny Seagrove goes one better: 'It is unbelievable that our wild grey squirrels are now being killed and packaged up for sale in such high street stores.’
I’m not entirely sure why she has trouble grasping the concept. There may be no long-standing tradition of grey squirrel consumption in Britain, but that’s largely because we didn’t have them until the end of the 19th century.
Had they been here since Norman times, like the humble rabbit, perhaps Ms Seagrove would be rather less starry-eyed about the little pests, instead of railing against the injustice of it all:
'Anyone who cares about wildlife, as I do, should be appalled at Budgens for allowing this. It seems that no animal is to be spared falling victim to such companies' marketing ploys. What gruesome product will be next to grace our food aisles? Blackbird, fieldmouse or mole?'
I can’t wait to find out!
Posted by Macheath at 17:37