Drama at the End-of-the-Pier Show

Sometimes you read a story and the word 'compensation' hovers, unspoken, in the air. This one is crying out for comment all the way through: I'm no JuliaM, but I'll give it my best shot...


A CHILD was inches away from falling off Clacton Pier, a family claims.


Oscar Weston, aged 20 months, was playing at the seaward end of the pier when he came close to a gap in the fence preventing people falling into the waves.

20 months - that would be rather less than two of your Earth years. Ye gods! The child is barely out of nappies - or possibly not even that - and he's let loose to run around at the far end of Clacton pier, an environment that has full-grown adults gripping tightly onto the rails (or is that just me?).

Meanwhile, let us pause a moment to savour the poetic flourish of  'the waves'; the Gazette, it seems, is harbouring a reporter who dreams of something altogether more creative. He evidently also has a keen sense of the dramatic:


His granddad Mark was watching and called out to Oscar, before rushing over to block off the gap with his leg and taking him away.

Well, thank goodness for that! A responsible adult intervened to protect a child from a hazard; where I come that's known as childcare, but perhaps they do things differently in Clacton. Meanwhile, the grandfather is in no doubt of his own heroic role in this near-tragedy:


“Oscar is well-behaved and luckily he stopped when I shouted across to him. If I hadn’t been able to put my leg across he would have drowned."

More poetic licence here, perhaps - the gap in question being easily bridged by one man and his leg: I know toddlers aren't very big, but they don't tend to dive head-first through apertures like this... 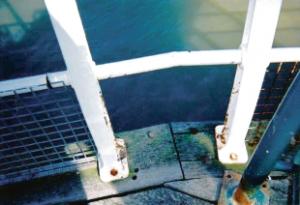 Handy, isn't it, how the drama of a narrowly-missed drowning prevents anyone - apart from cynics like me, of course - asking the obvious question; why was the child so far from his supervising adults that the nearest one had to 'shout across' and  'rush over'.

Nearly two decades ago, the abduction of Jamie Bulger sparked off a national demand for reins for toddlers; for months afterwards, nearly every small child out walking in public was firmly tethered. We, meanwhile, were ahead of the game - the Artful Dodger* at three was regularly secured with both reins and wrist-link on shopping trips, having extricated himself from each separately on more than one occasion.

The use of such devices seems to have fallen into abeyance once again - in Britain at least; I'm told they are still common in Germany and Holland, though in the freedom-loving US-of-A a passer-by once threatened to report my sister to the authorities for 'keeping that poor child on a leash like an animal'.

Take a trip through any busy town centre today and you'll be treated to the heart-stopping sight of free-range toddlers hopping on and off the kerb while their mothers bulldoze heedlessly ahead with their pushchairs - with supreme irony, you can be sure those same mothers would scream blue murder if they saw a strange adult approach one of their children, even if it were to lift it out of the path of oncoming traffic.

At least in this case, all seems to have ended well; the family have, one hopes, learned a valuable lesson and the readers of the Gazette have enjoyed a little bit of vicarious jeopardy; under the circumstances and in today's sensation-hungry culture, it seems almost churlish of the Pier's management to adopt quite such a low-key response:


"...an incident was reported to a ride operator regarding a hole in the fence of the pier perimeter. Once notified maintenance staff attended the area and carried out repairs immediately."

Still, if, by any chance, you were thinking of putting in an offer for neighbouring Walton Pier - currently on the market: a snip at £2.5 million - it might be best to remember the Weston family and make sure you put up a sign; 'Under-5s should be kept on a lead at all times'.


* Whose Houdini-esque feats included escaping on his first day at playgroup and setting off for home - though, unlike several parents recently, I never felt the need to take the story to the national press. Warhol certainly hit the nail on the head as far as fame is concerned...
Posted by Macheath at 19:57